Buddy Rich: The World's Greatest Drummer
"Buddy Rich has been called the greatest jazz drummer of all time!"

Buddy was born on September 30, 1917, and his drumming career spanned seven decades, beginning when he was just eighteen months old and continuing until his death on April 2, 1987. Naturally gifted, Buddy was said to have never taken formal lessons, and his only practice was when he played live.

Jojo Mayer (Swizerland/USA) is one of the greatest drummers to have ever walked our planet, not only because of his skill level, but because of his unrelenting search for creative freedom and musical expression.
Recent performances and recordings have earned him rave reviews: Jojo Mayer "...destined for "Drum God" status!" (Modern Drummer Magazine)

More recently, Jojo has been venturing into New York's Techno / Multimedia / Avantgarde / club scene by promoting his own weekly party event called PROHIBITED BEATZ. This new platform for live "Drum n' Bass", "Nu-Skool Breaks", "Speed Garage" and the latest stylistical hybrids and mutations in DJ culture, has also provided the back drop for his first solo project called NERVE. Described as an "endeavor in reverse engineering the textures and rhythms of the current stream of computer generated music into a live performed, improvisational format", NERVE and PROHIBITED BEATZ have created a reputation in the New York scene that already goes way beyond "a serious buzz". 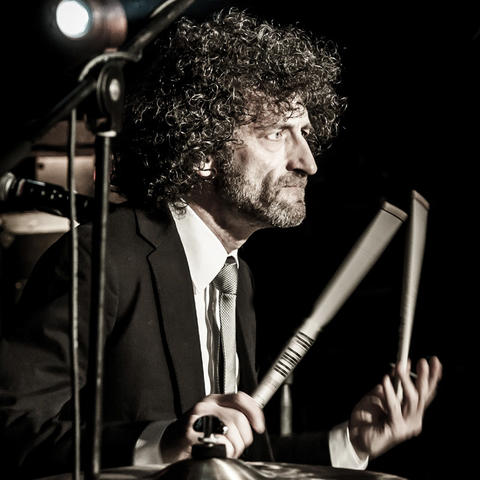