Maceo Parker embodies the legacy of soul and funk music like no other musician can. Always at the forefront, Maceo has been a common thread in the history of funk.

Maceo Parker embodies the legacy of soul and funk music like no other musician can. Always at the forefront, Maceo has been a common thread in the history of funk — helping to pioneer the sound of the genre in collaborations alongside seminal icons like James Brown, George Clinton, and Prince, all the while honing his own signature brand of showmanship.

«…When people talk about legends they mean 'they're done, but boy did they do good' when I think of Maceo Parker I think of legendary funk master and horn player, but not 'legend' in the term that he's done. He's still doing it. And that to me makes a really legendary person. …»   ~ Ani DiFranco

Leading his flawlessly tight band with a cool confidence, Maceo transports audiences to the slickest of eras in performances that are positively timeless. Maceo will soon re-release Roots Revisited — The Bremen Concert, a live recording from the first incarnation of Maceo’s own band in 1990 (which, at the time, included Fred Wesley on trombone, Pee Wee Ellis on tenor saxophone, Larry Goldings on B-3 organ, Rodney Jones on guitar, and Bill Stewart on drums).

Maceo's current band hits the road this season in celebration of repertoire spanning the prolific career of this funk legend: 50 Years of Funk.

Funk legend Maceo Parker is to release his first new studio album in 8 years. ‘Soul Food - Cooking with Maceo’ will be released on 26 June and will be the first album on the Mascot Label Group new imprint, The Funk Garage. Click here to steam the first single. 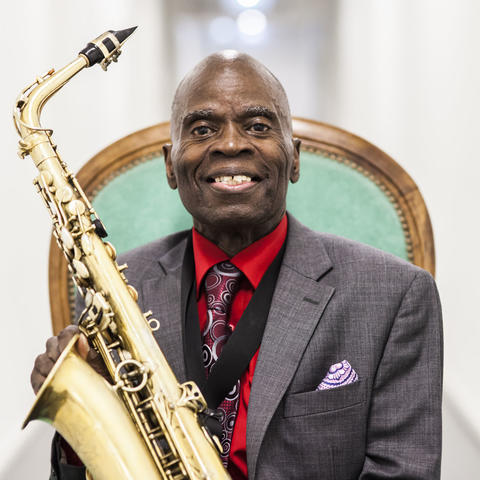