Felix Pastorius, Julius Pastorius and José Luis Santacruz, move in a context of interpretation and improvisation based on mutual listening, in which any of them can take the initiative within a concept of creative freedom taken to the maximum degree of sophistication. The components of the trio have such understanding and knowledge of the complex and beautiful compositions of Jaco Pastorius.

They can play in the different structural parts of the work changing the order or in it's bringing them back with the most unexpected riffs generating a constant surprise and assuring with their virtuosity an enjoyment of a high level concert.

Felix Pastorius  from that name and playing the bass, it is not difficult to associate it with his father, Jaco Pastorius (1951-1987), that journalists and jazz writers describe as “the best bass player in the world”; However, Felix Pastorius knows that he has to prove on stage that he is not just a celebrity. At age 15, he joined the group of percussionists from The Weather Report: Bobby Thomas, Jr.

At age 19, Victor Wooten recommended him to play with Jeff Coffin’s Mu’tet and developed his style on the 5-string and 6-string bass, which led him to join Cindy Blackman. In 2011, he joined the Grammy-winning jazz group Yellow Jackets, with which he participated in the recording of A Rise in the Road in 2013 and made a complete world tour, which provided an international platform . Felix leads two groups: Hipster Assassin (Punk Jazz) and Social Experiment (Jazz, Funk and Blues).

Julius Pastorius  Julius is a fantastic drummer drenched in the trilogical space of Jazz, Funk and R & B, with a very careful perspective. "There will always be some kind of comparison or expectation," he says, “and not just for listeners or critics, but also for me. "Formally self-taught". like his father, in terms of his own development as a musician, but he has always had the opportunity to fly around musicians in situations where most people do not.

José Luis Santacruz  with an elegant and fresh language, during the last years he has developed an original saxophone technique based on melody and bass embodied in his work: THROUGH JACO (2015) with a special international impact. Finalist of the Madeinjazz contest in New York and the International Composition Competition "Maurice Ravel" (2016y) 4th prize in the Jazz-Latino composition contest (Havana) 2004. He recently signed a record contract in the USA, with the label Roven Records; 9 albums in his name and an extensive career as an arranger and producer. 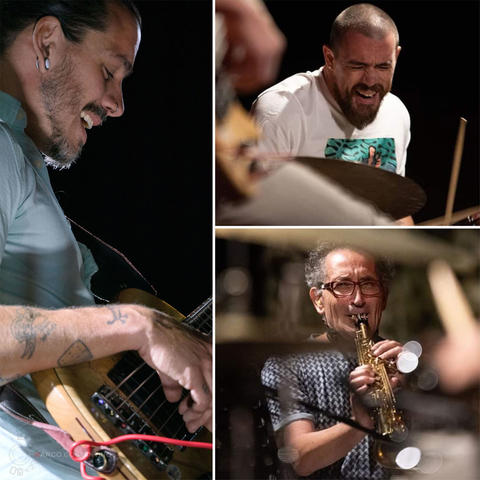