Celebrating the 50th Birthday of the JB's

Born in Columbus, Georgia, and raised in Mobile, Ala., Fred Wesley began his career as a teenage trombonist with Ike and Tina Turner. He later was music director, arranger, trombonist and a primary composer for James Brown from 1968-1975, then arranged for and played with Parliament-Funkadelic and Bootsy’s Rubber Band.

With Brown and as leader of his backing band The JBs, Wesley “was the world’s most famous sideman, orchestrating the sinuous grooves and contributing the bold, surgically precise solos that defined the language of funk.” In teaming with George Clinton and Bootsy Collins, he played a key role in taking funk to the next level. Wesley is featured in the documentary film “Soul Power,” as well as the Oscar-winning “When We Were Kings” and countless other documentaries about James Brown and funk music.

«It’s well-known in rap and hip-hop circles that, along with (James) Brown and (George) Clinton, WESLEY is one of the most-sampled musicians in the world today.» Timothy White, Billboard

Seminal hits he helped create include Brown’s and the JBs’ “Big Payback” and “Pass the Peas.” Others include Parliament’s “P-Funk” and Bootsy’s “Stretching Out.” Author of the acclaimed memoir, “Hit Me, Fred: Recollections of a Side Man” (Duke University Press 2002), Wesley is one of music’s most-sampled musicians. Artists who have sampled his work include Janet Jackson (“That’s The Way Love Goes”) and Nas (“Nastradamus”).

A veteran of the Count Basie Orchestra, Wesley also has worked with a who’s who of other artists including Ray Charles, Pancho Sanchez, Van Morrison, Usher, the SOS Band and Cameo, as well as with his close friends and cohorts Maceo Parker and Pee Wee Ellis.

Today, he plays and records with his own jazz-funk band, the New JBs, and is one-third of the innovative “klezmer-funk” collaboration Abraham Inc. He also freelances as an arranger, producer and studio performer, and shares his wealth of musical knowledge with young musicians and music students in educational settings worldwide. 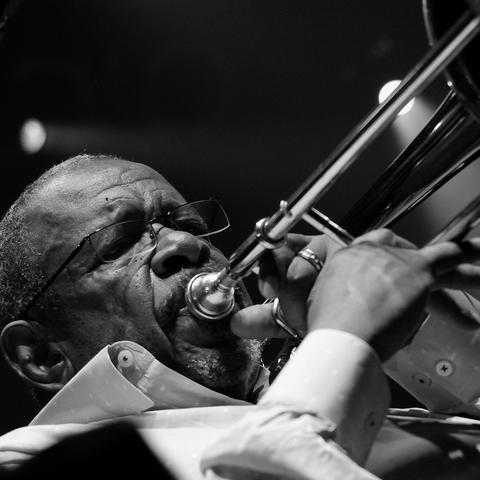