Vocalist Vivian Sessoms celebrates the 2019 release of her acclaimed new recording Life II. A highly respected and successful singer, Sessoms has collaborated with an impressive list of artists including Stevie Wonder, Chaka Khan, Donna Summer, P.Diddy, Ryuichi Sakamoto, Michael Jackson, and Cher, as well as on countless well-known commercials. But, Sessoms is also an incredible jazz singer and as noted blog Gina Loves Jazz reports, "She can both sound like an angel, but also more of a siren where necessary, but never takes it too far, which is highly appreciated. She’s not only a brilliant singer, but also a veritable songwriter."

Accomplished singer and Harlem native Vivian Sessoms, makes an almighty return in the company of some of the world's finest musicians and stakes a claim to a sound all her own on her new album LIFE. Having earned her stripes as a performer with Ryuichi Sakamoto, P. Diddy, Cher, Michael Jackson, Chaka Khan, Donna Summer, P!nk and many others, Sessoms and co-producer/creative partner Chris Parks bring her vast array of experiences to bear on an inspired, jazz-influenced set that proves Sessoms a fiery, forward-thinking artist in her own right.

"Although LIFE started out as a jazz record," Sessoms recalls, "there was a lot happening here in the U.S. and in the world, and that really started to influence my choice of songs, which I think pulled the record in a direction that was more socially aware." Whether she's recasting material by Billy Strayhorn, The Stylistics, Stevie Wonder, Nina Simone, Cole Porter or Isham Jones, Sessoms is consistently powerful and very much at home within these finely crafted and surprising arrangements. The acoustic and electric blend, the expansive harmonic concept of keyboardist Shedrick Mitchell, the grooves anchored by drummer Donald Edwards and the numerous interludes: it all coheres to make LIFE something confident and unique, a definitive statement. Sessoms expressive, sophisticated sound draws on jazz, R&B and pop in fresh and moving ways.

Vivian Sessoms Premierse 'I Can't Breathe' Video: 'I Want to Honor Erica Garner and Her Dad'

Political consciousness is never far from the surface on LIFE, Sessoms first full length in over ten years. Certainly in Sessoms' searing rendition of "Strange Fruit," the anti-lynching poem-turned-song made famous by Billie Holiday. Vivian explains,"'Strange Fruit' is a song I never performed until very recently because it was very painful. One of my favorite movies is "Lady Sings The Blues" with Diane Ross. I remember seeing that film as a kid and asking my mother what did "blood on the leaves mean" and her explaining to me that the song was about lynching and what that meant. I was stunned into silence that things like that could happen to people, so hearing that song has often made me want to cry. In the wake of tragic incidents like Michael Brown, Akai Gurley and several others, I was moved to start singing the song in reverence. I've since talked about the civil rights movement and how Billie received death threats when she recorded the song. It was still relevant 30 years later when Nina Simone re-recorded it and we could never have foreseen that it would still be as relevant today. It literally haunted me and rang in my head everyday until I decided to record it…

Vivian and her band are currently on a world tour in support of LIFE.

"Sessoms shines on LIFE's original "Dreaming Of A Boy", a languid ballad about her son growing up, and her take on "See Line Woman" gives the song a modern bounce with saxophone contributed by Bowie sideman Donny McCaslin." - Downbeat

"With great excitement, Vivian Sessoms unveils her new album LIFE, and while the name may be new to some, it will serve as a welcome return for many. The music is luxurious and rich; aptly placed interludes act as beautiful segues as we’re led from one song to another, and Sessoms sounds as great vocally as she ever has done." - UK Vibe

"When you hear this music I promise you will stop in your tracks! As organic a vocalist as yours truly has heard. She is overflowing with the joy of singing. Her vocal abilities are second to none. As a songwriter and producer, she soars. The new body of work is a revelation." - Hybrid Jazz

"Now she comes up with LIFE, an album of standards old and new plus original compositions – just about the perfect repertoire for an admirable album. The arrangements on the album here are both unique and innovative, spot-on and delicious." - Gina Loves Jazz 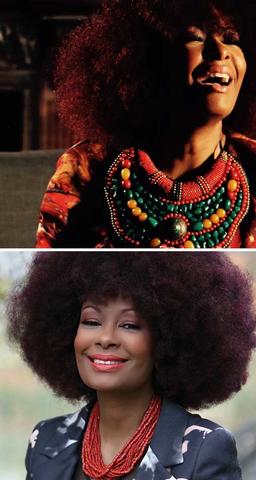