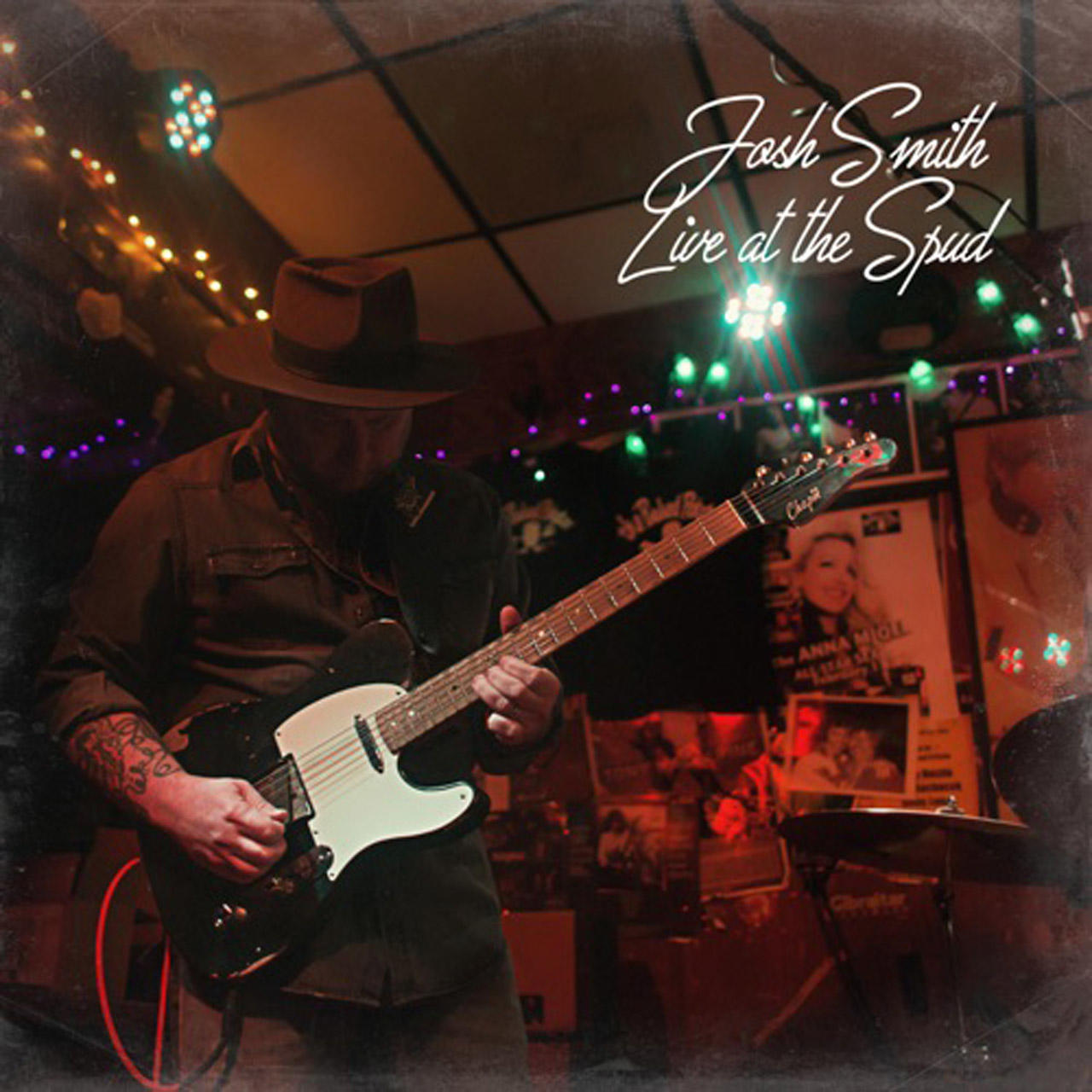 Live at the Spud

For Immediate Release - Flat V Music releases Live at the Spud by Josh Smith on Jan. 8th 2020. This is the follow-up to Smith’s acclaimed 2017 release, Burn To Grow.

Live at the Spud features guitar maestro, singer-songwriter Josh Smith performing his signature mix of blues, rock, and jazz originals, culled from albums spanning his entire career and features the dynamic power trio of Josh on guitar and vocals, Gary Novak on drums and Travis Carlton on bass. With nine tracks, the album was recorded and filmed live at the Legendary Baked Potato music club in Studio City, California over two nights in December 2018.

The goal was to present an unedited look at a normal night at the Baked Potato. Raw, powerful, improvisational and explosive. Josh says, “I wanted to give the fans a taste of what our shows are like in an intimate setting.” He adds, “We truly went for it on every note both nights.”

“Anyone who has witnessed one of Josh Smith’s live performances comes away in awe of the man’s ability to fuse jazz, blues, and country into one neat package — with a technical ability that has to be seen to be believed.” Music Radar

Live at the Spud kicks off with opening track, "How Long", a barn burner of a swinging blues-rock dirge. Always one of the most fun songs of the night and Gary Novak set the tone for the entire show with the intensity he brought to it. Next song, "Pusher" is one of the most requested tunes and a crowd pleaser that features a funky groove and plenty of interplay between the trio.

After a slow blues number and funky blues tunes with horns, the track “When I Get Mine” blasts the roof off the club with pure rock energy and fire, followed by “The Middle” where Josh channels his Stevie Ray Vaughan roots. Closing the record, is a beloved shuffle, “Where’s My Baby” that Josh says, “Feels so good to play, I don’t ever want to stop!”

As a producer as well as the frontman in the spotlight, Josh Smith chose the material for Live at the Spud almost as a culmination of the last 10 years, something from each of his albums, almost to wrap up that period of music in his life, before pushing ahead. The band goes for broke, having the time of their lives performing on stage. That excitement can be heard live on the record.

Josh is a guitar virtuoso who has been playing since he was six years old. By age 12, Josh was playing at established professional blues jams in South Florida and began sitting in, preforming and recording with such greats as Jimmy Thackery, Tinsley Ellis, Kenny Neal, Lucky Peterson, Matt “Guitar” Murphy, Johnny “Clyde” Copeland, Double Trouble, Joanna Connor, Kim Simmonds and more. Jimmy Thackery said, “Josh is three heartbreaks away from being a true blues guitar genius.”

That insight from Jimmy Thackery proved true as Josh began releasing CDs at age 14. His first national tour with his power trio, Josh Smith and the Frost, featured Josh as bandleader, on vocals as well as guitarist. The legendary producer Jim Gaines (Santana, SRV, Luther Allison, Steve Miller, Jimmy Thackery) produced Josh’s third CD, Too Damn Cold. By 1998, he had completed four national tours with his band and was then asked to support the great B.B. King on a number of shows.

Opening for BB King was just the beginning of becoming an in-demand artist and lead guitarist for artists such as Mick Jagger at the Grammys, Taylor Hicks, Ricky Fante, Raphael Saadiq, and more. He has the distinction of inducting Neil Diamond into the Kennedy Center Honors with Raphael Saadiq.

“As a player, writer, singer and producer, Josh Smith has it all. Smith can truly rock. But his sense is strengthened by tasteful ideas, substantive playing, and a deep understanding of blues guitar.” Vintage Guitar Magazine, August 2018.

“Josh is one of my favorite musicians on the planet. His musical depth and guitar playing transcend the boundaries of the blues genre into a genre of his own. I am proud to always share a stage with him and even prouder to call him my friend. – Joe Bonamassa

“His most recent CD.. is filled with gritty, rockin’ blues with guest appearances by Kirk Fletcher and Joe Bonamassa.” The Huffington Post

When not touring with his power trio nationwide in the U.S. and all over the world, L.A. resident, Josh Smith also tours/performs with friend and colleague Joe Bonamassa and engages in sizzling guitar duels on stage with Kirk Fletcher and Bonamassa in music clubs in Southern California.